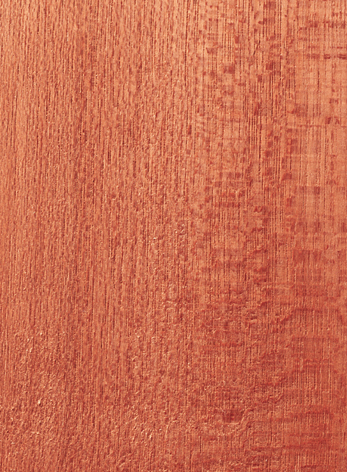 The standard graveyard tests on untreated specimens carried out by the Forest Research Institute Malaysia (FRIM) have classified dark red meranti as moderately durable with an average service life ranging from about 2.0 years (S. singkawang) to 3.9 years (S. platyclados). For the species S. curtisii, S. pauciflora, S. platyclados and S. acuminata, the heartwood is classified as moderately durable (with an average service life of 2-5 years). Similar tests on S. pauciflora at Princess Risborough (U.K.) have indicated that the timber is moderately durable with a service life of 10-15 years (under temperate conditions). The sapwood of dark red meranti is susceptible to dry-wood termite attacks, which may eventually spread to the heartwood. However, an initial invasion of the heartwood is less likely to occur. Untreated timber of S. curtisii was only slightly attacked by marine borers after eight months submergence at Port Klang (Thomas, 1933). Preliminary work done by Oliver & Woods (1957, 1959) have tentatively classified dark red meranti as resistant to such attacks.

The timber is difficult to treat with preservatives. Generally, it was found that all forms of meranti (including dark red meranti) absorb less preservative than kempas and keruing when subjected to identical treatments.

Texture is moderately coarse and even, with interlocked grain.

It is easy to saw and work and produces a smooth planed surface.

The nailing property is rated as good.

The seasoning properties of some species tested are summarised below:

Kiln Schedule F is recommended. The timber dries rapidly without any degrade.

The shrinkage of some species tested is summarised below:

The movement of seasoned timber is classified under Type I and Type II.

All timbers in the meranti group are liable to be attacked by shot-hole and pin-hole beetles, but the attack is usually not serious in species of dark red meranti. Although most of these attacks take place in the living trees, any delay in extraction after felling may also lead to serious damage. Spongy heart is a common defect in the red meranti group. Timber with this defect is exceptionally brittle and may result in compression failure and the corresponding reduction in strength properties. In a study of logs of dark red meranti and light red meranti from Perak state, about 30 logs of seraya (S. curtisii), over 40 logs of nemesu (S. pauciflora) and more than 100 logs of light red meranti were found to contain varying degree of spongy heart. This presence of spongy heart was less severe and also less spread in dark red meranti than in light red meranti . But large sized logs of dark red meranti (both seraya and nemesu) tend to rot away at the centre leaving a hollow core with active termite attack on the fringes (Mohd. Alwy, 1961). One prominent feature of dark red meranti is the presence of exceptionally numerous and conspicuous lines of resin canals, which may be objectional to some user. Small resin pockets are present but they are seldom numerous. One case was noted in which abnormally large horizontal resin canals in S. ovata marred the appearance of the sawn timber.